Christmas is over. And a very different Christmas to boot. I am back in Norway, probably the most quiet and peaceful country in the world. Back to snow and ice and winter darkness. Back to a place where catastrophe and tragedy are strangers to most and familiar only to the few.

The contrast could not be greater to Bangladesh where I spent Christmas and New Year. Near the border to Myanmar, in the far east corner of Bangladesh, in one of the poorest parts of the country, a refugee camp has sprung up that is most likely the largest in the world. 850 000 people – men, women and children – live under conditions that can only be described as abominable. Some of them have lived there since 1994 when the first wave of refugees spilled across the border from Myanmar. The great majority has arrived since august when the violence in their home country forced them to pack up and flee. I had seen the footage of the exodus on TV before leaving and I had seen the photos of the refugee camp stretching for miles and miles across the once wooded hills of Chittagong province.

END_OF_DOCUMENT_TOKEN_TO_BE_REPLACED

It is April 26th. As I watched the evening news last night, it hit me: It’s been a year since the great catastrophe that devastated parts of Nepal, the small country clinging precariously to the foothills of the Himalayas. The earthquake (or rather quakes) left one of the poorest countries on the planet in an impossible situation. Unfortunately, it is painfully obvious that the rebuilding process is not on track and most of the displaced and the homeless still live in temporary shelters. I was part of the relief effort last year working at the Norwegian Red Cross Field hospital at Chautara for a month. The question I cannot help to ask is: Have we failed?

I didn’t write about my stay in Nepal  when I returned home ten months ago and I have put it on hold since. I’m not really sure why. There have been lots of other things on my mind and I was optimistic about the prospects of rebuilding the country and it felt redundant somehow. I feel bad about it now, since the way things have turned out, keeping Nepal on people’s minds is important. So this is my belated contribution. END_OF_DOCUMENT_TOKEN_TO_BE_REPLACED

After the first ten days I feel more at ease. Things that looked exotic and strange to me a week ago seem now familiar. The days pass in a predictable pattern and we don’t get called out at night anymore. We usually set up our surgeries the day before which gives me ample time for preparation. Routine kicks in and I can slowly reclaim my comfort zone.

The on-calls are still a bit of a nuisance though. Most patients that are admitted at night have medical conditions which I have forgotten all about and so I have my nose buried deep in the books of medical wisdom every time an asthma or hypertension patients enters the tent. We are five doctors and thus on-call every fifth night and that means we spend 34 hours at the hospital. We are not overwhelmed by work during these night shifts, but it isn’t easy to get good sleep either. We are supposed to sleep in a mosquito dome in the admin tent which happens to be located right adjacent to the main street. Despite the fact that Basey is a quiet town by Asian standards, they manage to keep up quite an impressive noise level: First there are the motorcycles and the stereos that spit out endless streams of old and new love songs in dubious sound quality. The Philippinos really like their softpop songs, which is one of the few things I have to hold against them. 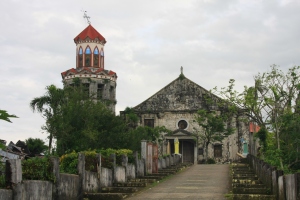 END_OF_DOCUMENT_TOKEN_TO_BE_REPLACED

My first night has been warm and humid. My only cover is a sheet and even that is too warm. My pillow is soaking wet from my sweat. The team before us bought in ventilators with one of these miracle machines placed in each tent and they give at least some respite from the heat. It is only four o’ clock in the morning, but I’m wide awake. I don’t know it yet, of course, but this is going to be a permanent feature: Early beds and up at sparrow’s fart. I take a quick cold shower (warm showers are not available right up to the end of my stay) and then we eat breakfast just after dawn at 6.30 am (again rice, with eggs or every now and again some meat) and then the first bus leaves for our field hospital at 7.15 am. ICRC rules are strict: No delegate is allowed to drive, all transport of personnel is done by well-instructed and carefully selected drivers. The reason for this is, of course, that most injuries and fatalities among delegates on international missions are due to traffic accidents. As for my other worries, by the way: The NPA has declared a cease-fire and is nowhere to be seen; there is absolutely no looting, and I haven’t seen any spiders or snakes yet. The dengue mosquitos, meanwhile, are kept at bay by abundant layers of insect repellent. I feel a bit stupid now for worrying at all, but I quickly decide to blame it on the jet-lag. No reason to suffer unnecessary dents in my self-confidence at this early stage. By the way, there is no Malaria on Samar and I choose therefore not to take any prophylaxis.

The ICRC Field Hospital, located in the basketball hall of Basey (photo by Norwegian Redcross)

END_OF_DOCUMENT_TOKEN_TO_BE_REPLACED

Three years of waiting have come to an end. It was in november 2010 that I started my Red Cross training and I have been a delegate, ready to be deployed as a surgeon for two and a half years. I have completed online courses, have lived through seven days of a simulated mission in the woods of Eidene, Norway, where we built up a field hospital and trained the practical aspects of being on a mission (ERU course). I have done the IMPACT course, another seven days of learning about the Red Cross movement, its structures and its goals and purpose. I was ready! Very, very ready to be deployed. But then, instead, came the long void: Luckily for planet earth, major disasters which would warrant deployment of a field hospital, just didn’t seem to happen anymore. ‘Well, great!’ the humanitarian in me thought and started accommodating to this situation. What can be better! But then typhoon Yolanda hit the Philippines, and what seemed like a remote possibility, namely being deployed to a disaster area as a surgeon, suddenly turned into a very real prospect. Ever since Norwegian Red Cross headquarters called me in the middle of december, I knew I was going to head for the Philippines on New Years day.

I have finally arrived in the country where my first mission will take place. I am headed for the Visayas, namely the island of Samar, where typhoon Yolanda, which is called Haiyan in the rest of the world,has left vast strips of coast devastated and in ruins. Unprecedented winds and a giant wave, that came in the wake of the storm, have left an impoverished population even poorer and more destitute than ever. Millions of people have lost everything in the storm. Millions of homes are destroyed.

At my hotel room in Manila, waiting to move on to Basey

I am restless, pacing my room at the rather posh Somerset Millenium Apartment Hotel in the rather posh Makati district of Manila. The setting is a bit unreal, nothing in this big and vibrant city even hints at the catastrophe which has beset the southern islands of the archipelago. Life in this metropolis, which tries desperately to be as American as possible, couldn’t be more normal.