Three years of waiting have come to an end. It was in november 2010 that I started my Red Cross training and I have been a delegate, ready to be deployed as a surgeon for two and a half years. I have completed online courses, have lived through seven days of a simulated mission in the woods of Eidene, Norway, where we built up a field hospital and trained the practical aspects of being on a mission (ERU course). I have done the IMPACT course, another seven days of learning about the Red Cross movement, its structures and its goals and purpose. I was ready! Very, very ready to be deployed. But then, instead, came the long void: Luckily for planet earth, major disasters which would warrant deployment of a field hospital, just didn’t seem to happen anymore. ‘Well, great!’ the humanitarian in me thought and started accommodating to this situation. What can be better! But then typhoon Yolanda hit the Philippines, and what seemed like a remote possibility, namely being deployed to a disaster area as a surgeon, suddenly turned into a very real prospect. Ever since Norwegian Red Cross headquarters called me in the middle of december, I knew I was going to head for the Philippines on New Years day.

I have finally arrived in the country where my first mission will take place. I am headed for the Visayas, namely the island of Samar, where typhoon Yolanda, which is called Haiyan in the rest of the world,has left vast strips of coast devastated and in ruins. Unprecedented winds and a giant wave, that came in the wake of the storm, have left an impoverished population even poorer and more destitute than ever. Millions of people have lost everything in the storm. Millions of homes are destroyed. 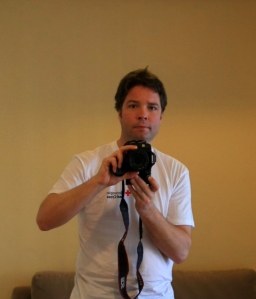 At my hotel room in Manila, waiting to move on to Basey

I am restless, pacing my room at the rather posh Somerset Millenium Apartment Hotel in the rather posh Makati district of Manila. The setting is a bit unreal, nothing in this big and vibrant city even hints at the catastrophe which has beset the southern islands of the archipelago. Life in this metropolis, which tries desperately to be as American as possible, couldn’t be more normal.

Organisational necessities with briefings and meetings with the ICRC (International Comitee of the Red Cross) will pin me down in Manila for two long and painful days, while I really just want to get on to Basey, situated on the southern coast of Samar, where Norwegian Red Cross has deployed its field hospital. I want to get going, start my mission properly; start working; start doing surgery. The long wait in Manila drives me crazy.

It has been hard to say good-bye to my family. Never before have I been away from them for such a long period of time. I found the good-bye surprisingly hard and I had to struggle with my tears. A struggle, by the way, which I lost rather quickly. While looking forward to the mission and meeting the team, I find myself counting days until I will see my wife and my two boys again. This emotional schizophrenia will stay with me throughout the mission.

On the 4th of january we finally get to move on. The ‘We’ being myself and Kirsti, an anesthesiologist from Oslo, who is on her first mission, too. I met Kirsti at the briefing in Oslo and then again at the airport in Amsterdam. We’ve travelled together since. Now we finally get to start on the last leg of our journey, which will carry us a long way from the kind of security and predictable environment that we are used to. And it will put me pretty exactly at the opposite side of the earth from my home.

While we check in our bags and boxes at Manila airport, anxiety hits an all time high. Thoughts are creeping up freely: We travel with Cebu Pacifics, isn’t that the airline with all the horrible ratings? And then the security briefings come to mind, about lootings and other forms of crime in the wake of the typhoon. Spiders were mentioned, and snakes and Dengue fever are apparently around there, too. There have been heavy rains for a couple of weeks now and the team before us reported leaking tents and clothes that were rotten at the end of their stay. And then there’s the NPA, the New Peoples Army, which has resisted gouvernment forces in the jungles of the Visayas for decades: It’s called a low-level conflict, but what if we turn out to be affected anyway? What, if we end up being one of the few people  every year who end up with bullets in their heads? Thoughts are creeping freely – far too freely- and I feel the urgent need to replace them as quickly as possible with some sort of realistic picture on the ground. I can’t wait to get there.

The islands of Leyte and Samar. The Norwegian Field Hospital is deployed to Basey, Samar

The path of typhoon Yolanda

The flight is uneventful. Already from the plane, while descending into Tacloban, we see the havoc that the wrathful storm has wreaked on these lovely islands: Broken and smashed forests of palm trees, flooded rice paddies, destroyed homes and livelihood and the colourful patchwork pattern of tens of thousands of tarpaulins which dot the landscape. Those are the temporary and depressing shelters that have been hastily erected with the help of international donors to give the battered people at least a little protection from the unremitting rains. 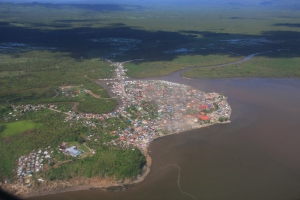 Our first glimpse of Basey from the air, before we land in Tacloban

The airport has been hard hit, too. The landing is rough, due to a lavish amount of potholes. The conveyor belts are in ruins and our bags are brought forward by a swarm of porters. When the first team arrived with the hospital equipment, Tacloban airport was not even operational and everything had to be shipped in to Leyte and Samar. Things have improved a lot already.

We get picked up by ICRC drivers, as usual spot-on and reliable. When we leave the airport, I have my camera ready. I certainly expect to take a lot of pictures on our way to base camp. But pretty much straight away the sight that greets me along the road makes my heart ache and my camera sinks into my lap: Although a lot of the rubble has been cleared during the last six weeks, the destruction is gut-wrenching. People live in huddled shelters along the road, usually without walls, and surrounded by water and mud. The rains which have hammered the islands after the storm have left men, women and children living in ponds and puddles of water. It is a miracle that so few have succumbed to infectious diseases, a miracle achieved in part by the quick help provided by international aid agencies. During the trip we see new and large water tanks which line the road in regular intervals and which are refilled daily by water trucks with clean water. There are lots of newly built latrines, too. I will be doing surgery, but there is no doubt that it is the water and sanitation guys who save the most lives after a catastrophe like Yolanda. Clean and safe water and strict hygiene measures is what matters above all. 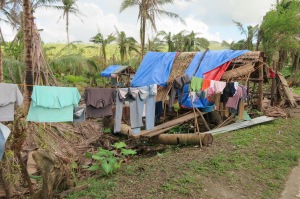 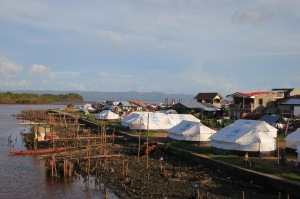 temporary shelters and tents in Basey

The power of the storm and the water have toppled concrete walls like card boards. Power lines and masts are in shambles, broken like matches. The scenes remind me of photos I have seen of Hiroshima after the bomb. During the whole trip to our camp, which is approximately 1.5 hours from the airport, I don’t take a single photo.

But I also get a first glimpse of the remarkable spirit the Philippinos exhibit in the face of the utter destruction that surrounds them. One would expect a demoralized population; weary, traumatized and broken by what they are going through. But there are no empty or resigned stares. The people who wander along the streets wave and smile, and there are posters everywhere saying “a million thanks to the world” and the children are playing in the ruins as if nothing has happened. It is quite unbelievable and so, from the very start, I find myself admiring these resilient and friendly little people.

We leave Tacloban behind us and cross over the magnificent San Juanico Bridge from Leyte into Samar. The bridge was built during the dictatorship of Ferdinand and Imelda Marcos. The former beauty queen grew up in Tacloban and is still quite revered in these parts of the Philippines. She even managed to get elected senator for her home province Leyte after her return from exile and after she was pardoned by Corazon ‘Cory’ Aquino. While Cory died in 2009 of colon cancer, Imelda is still pretty up and running and even had a go at the presidency, though unsuccessfully. The bridge was her gift to the islands of her youth when she and her husband wielded almost absolute power during th 70’s and 80’s.

Finally, at 3 o’ clock in the afternoon we roll into the camp which is going to be our home for the next month. The first impression is excellent! The camp has been established on the premises of a battered beach resort. The ICRC has done a lot of tidying up here and almost all personnel has been moved here. Unfortunately, it is a forty minutes drive from the field hospital in Basey, but it certainly looks like a place one can live in for a couple of weeks. The equatorial sun is beating down and there is absolutely no sign of the rain which has made the lives of both delegates and the locals difficult during the last weeks. As the day moves on we get to meet all the international delegates of the team and one of my greatest fears quickly vanishes: They seem all to be great and easy-going, an important quality in people I will have to spend every day and evening with for the next four weeks. We will be living in tents and I move into a single, two-by-two meter version. My field bed looks inviting and for the first time in 3 days I allow myself to relax a little. Night falls quickly so close to the equator and after dinner (with rice, there will be lots of rice during the next weeks) and a short and friendly team meeting, I drag my jet-lagging body to bed. Tomorrow I will see the field hospital in Basey for the first time. I am ready. 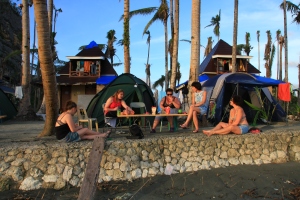 Our first day in the camp on the beach. It will turn out to be one of the very few days without continuous and torrential rains. Happily, when this picture was taken, we were quite oblivious to future developments

Please read my other blogs on other missions with the Rec Cross and on prostate cancer:

The Earthquake in Nepal. Looking back

Prostate Cancer for Dummies-Part 2: the PSA

6 thoughts on “THE PHILIPPINES AFTER YOLANDA- PART 1”